Natural Life Archive: A Q&A with Tirtza Even

¶ 2 Leave a comment on paragraph 2 0 AC: Natural Life (2013) introduces itself as a look into the lives of “five individuals who are serving a natural life sentence (Life Without Parole) for a crime they committed as juveniles.” How were you introduced to the cause of juvenile life imprisonment? What inspired you and your collaborators to pursue this project?

¶ 3 Leave a comment on paragraph 3 0 TE: Before taking on the production of Natural Life, I was teaching at the University of Michigan and working, through their Prison Creative Arts Program (PCAP), with a young prisoner named Justin Gibson who was incarcerated in prison for a life sentence from age 15. We were collaborating on a short, experimental video/3D animation that we had conceived and produced together.  We were meeting every other week for approximately two years to develop the piece. In 2010 I got a job offer at the School of the Art Institute of Chicago and needed to end our collaboration. I decided at that point to take on the issue of juvenile life imprisonment more directly, and to create a documentary film that would bring public attention to his situation and that of the 2,500 other juveniles sentenced for life without parole in the United States. I was incredibly fortunate to know Deb LaBelle, a civil rights lawyer working in Michigan on behalf of the 350 juveniles sentenced to LWOP there; with her extensive support I selected the juveniles featured in the project, contacted them and their families, and began work on Natural Life.

¶ 4 Leave a comment on paragraph 4 0 AJ: Can you tell us about the decision to have three different representations or facets of the project: the single-channel video, the gallery installation, and the interactive online archive?

¶ 5 Leave a comment on paragraph 5 0 TE: I wanted to engage a broad spectrum of audiences both nationally and internationally, and to that end, to utilize theatrical screenings (first version) and gallery exhibitions (second version) alongside digital and social-media means (third version).

¶ 6 Leave a comment on paragraph 6 0 My intention was to have the piece distributed to the community at large: juveniles serving the sentence, family members of victims, community organizations, criminal justice advocates, educators, law enforcement, and prison reentry programs. The ideal venues for my project, therefore, included sites where decision/policy-makers, legal-system reformers, human rights activists, and the general public converge, such as conferences for new-media and film, UN nongovernmental fora, law schools and universities, arthouse cinemas, film festivals, festivals for visual ethnography and art, museums and galleries, and, finally, through the online archive, also social media hubs.

¶ 7 Leave a comment on paragraph 7 0 Each of the three versions engages not only a different audience but also allows for a distinct experience for the viewers. While the single-channel presentation conveys a somewhat closed, linear story, the installation—with the aid of the work of the installation designer, Ivan Martinez—was formed to generate a multi-faceted environment that both resonates with the space invoked by the film and allows for the additional representation of statistical and historical data pertaining to JLWOP. Lastly, the online archive forms a more open-ended space where users can independently navigate the different stories and perspectives, and thus construct their own individual narrative and angle on the issue.

¶ 9 Leave a comment on paragraph 9 0 AC: Archives often connote the passage of time, of history, and of earlier stories, records, and items preserved for the future to use and interpret. In the case of this project, the use of the word “archive” seems to suggest the foreclosure of these five individuals’ lives. What is the implication of the word’s use for you? What inspired you to name the online component an archive?

¶ 10 Leave a comment on paragraph 10 0 TE: The term “archive” for me implied a simple function. In the process of producing the single-channel version of the project, I accumulated over twenty hours of video and close to fifty recorded interviews with individuals who were involved with the crime, arrest, and sentencing of the featured inmates. Among them were judges, lawyers, police officers, reporters, wardens, teachers, child psychiatrists, legal experts, and victims’ family members. All this was assembled alongside several hours of phone interviews with the inmates themselves. Obviously, only a very small portion of this material ended up in the film itself, and much that was poignant and crucial in the various encounters remained outside the piece. My hope, through the online version of the project, was to make available the raw material, and to create an archive—a database of the footage I accumulated in the process of working on the project—that the viewers can navigate, research, and interpret.  The material in the archive is very minimally curated or edited and is assembled for each of the participating speakers along a small number of shared questions asked during the interviews.   Here, unlike in the linear piece, the users can dwell on the portions of each story or the aspects of the issue that are of value to them, and delve into those at differing degrees of depth and investment.

¶ 12 Leave a comment on paragraph 12 0 AC: How did you go about finding collaborators for this project? I noticed a number of the contributors to this project studied at the Art Institute of Chicago. Did teaching at this institution help you find collaborators? Was the prison outreach workshop at the University of Michigan important to the development of Natural Life? What did the different collaborators bring to the project?

¶ 13 Leave a comment on paragraph 13 0 TE: Yes, I met most of the people who helped in the production of the project at the School of the Art Institute of Chicago (SAIC). The school forms a rare pool of insightful and talented people and is one of the most intellectually rich and creatively nourishing communities I have ever been a part of. Those who joined the project didn’t just aid in the making of the piece but became literal collaborators, feeling the weight of the encounters with the inmates and their families, prying open the JLWOP issue, and conceptualizing with me the formal approach the project would eventually take. Most of the camera people (all but Raphael Rodolfi) came from SAIC (among those, Joey Carr, Emilie Crewe, Gonzalo Escobar, and Yoni Goldstein); the co-editor, Meredith Zielke, graduated from and now teaches at the school; and Ivan Martinez, who was the installation’s interface designer and the designer of the discussion guide for the film, graduated from the school. Finally, for the last version of the project, the Interactive Archive, I had a general idea of the interface I wanted to apply, modeled after work I had done in the past, but that form grew and was developed through ongoing conversations with the partners (not incidentally, all from SAIC) who helped execute the piece: Nick Briz, Chris Collins, and Daniel Spangler. My student, Alexa Tamar Smith, with her offer to help me with the project, created the initial push needed to make this third version of Natural Life.

¶ 14 Leave a comment on paragraph 14 0 Other collaborators such as Oded Zehavi, the musician; Jacob Ross, the sound designer; and Phillip Sample, the assistant director for the prison reenactments, similarly contributed intensively to the conceptualization and fine-tuning of the fabric of the film.

¶ 15 Leave a comment on paragraph 15 0 The University of Michigan’s Prison Creative Arts Project, led by Buzz Alexander, introduced me to—and enabled my initial collaboration with—Justin Gibson, the first juvenile lifer I met in prison. Their work, alongside the endless and ongoing support from Deb Labelle, is what ultimately allowed Natural Life to be produced.

¶ 16 Leave a comment on paragraph 16 0 AC: You give talks and discussions about Natural Life and created a handout to introduce the topic. What has been the audience response? Have you gotten a strong reaction to the online materials?

¶ 17 Leave a comment on paragraph 17 0 TE: The archive is in its beta version at the moment, and as such is beginning to be displayed at a variety of venues, including Hyde Park Art Center, Chicago; SXSW Interactive conference, Austin; Currents New Media festival, Santa Fe; and FILE 2016, Sao Paulo, Brazil. The recent Supreme Court decision to allow resentencing opportunities retroactively to juveniles already serving the sentence (Montgomery v. Louisiana, January 25, 2016) has made the project further relevant and current. Having the three versions (single channel, installation, and online) increased the project’s visibility and range of impact. Audiences have ranged from high-school kids, college students, and families of the incarcerated to cinema- and museum-goers, legislators, lawyers, and human rights activists. Responses have been uniformly supportive of the cause, invested, and engaged. Panels that often follow a screening or a display allow the conversation to be led by legal spokesmen on the one hand, and people impacted by the sentence on the other, as well as by one of the inmates featured in the project who calls from prison and answers questions from the audience.

¶ 18 Leave a comment on paragraph 18 0 AC: What is the goal of your project? Do you hope to directly impact policy, for instance to change the law in states that also allow seventeen year olds to be tried as adults (Georgia, Louisiana, Michigan, Missouri, South Carolina, Texas, and Wisconsin)?

¶ 19 Leave a comment on paragraph 19 0 TE: My hope is to insert the project into the midst of the current heated conversation over the Juvenile Life Without Parole sentencing laws, and to impact public opinion on the issue directly. My intent is to have the piece stir — and engage in — a fresh, impactful, public debate contesting the sentence of Juvenile Life Without Parole, proposing its replacement with a non-punitive, rehabilitative model, and obtaining release opportunities for those juveniles currently serving the sentence. 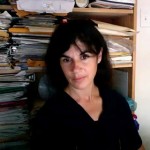 Associate Professor of Film, New Media, and Animation – School of the Art Institute of Chicago