Undergraduates in the Archives – Werner 3

¶ 1 Leave a comment on paragraph 1 0 Oh my, this is a hard one to answer. Without intending to sound unbearably sappy, there are nearly too many moments of success for me to count! My favorite moments are those that come outside the seminar: when a student makes a connection between what we have been discussing and what another class of hers is doing; when a professor tells me that a former student has been teaching them all to pay attention to the textual history of a poem they are reading; or when a former student sends me an e-mail to point out a newspaper article about books he found interesting. All those moments mean that the lessons they have learned in our seminar are living on for them in other contexts.

¶ 2 Leave a comment on paragraph 2 0 Other favorite moments have been when students have found something out about a book that is news to the Library’s catalogers. Given how tremendous the Folger catalogers are, that is hard to do! But, for instance, one student was working on The essayes of a prentise, a book that had been written by King James in 1594, when he was James VI of Scotland and not yet James I of England. The student’s interpretation of the book was that it was deeply embedded in James’s perspective as a Scottish monarch and aspirant to the English throne, especially since the book was bound as a presentation copy for Lord Burghley. But the catalog record for the book, following standard name authority rules, listed the author as James I. Given the student’s research, however, the book’s record now includes a note clarifying the nature of James’s title when it was written. (You can see a blog post I wrote about the book and this issue here; you can find the catalog record for it here.)

¶ 3 Leave a comment on paragraph 3 0 Another student was working on James Smith’s The generall historie of Virginia (1624) and was struck by its odd binding, in which one armorial device was stamped on top of another. The Folger’s catalog identified one of them as James I’s, but it took some joint sleuthing for her and I to work out that the stamp on top of James’s was that of George Villiers, the Duke of Buckingham. As far as I can work out, no one else had noticed that, not the previous owners, the booksellers, or the Library’s catalogers. (That record still does not include the additional information about the binding because I have not yet brought it to their attention. But you can read about the book and see some pictures of the binding here; the catalog record is here.) 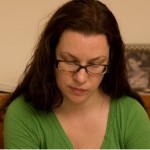 Sarah Werner is the Undergraduate Program Director at the Folger Shakespeare Library and an Associate Editor of Shakespeare Quarterly. She is also Editor and a regular contributor to the Library’s blog, The Collation.