¶ 1 Leave a comment on paragraph 1 0 Every year in January historians from around the world meet at the American Historical Association (AHA) annual conference. While there, I am always struck by just how broad a field “history” represents, yet how often historians are able to make connections to each other’s work, despite being far removed temporally and geographically. In preparation for the conference I read through the AHA’s flagship journal, The American Historical Review (AHR), for the previous year.  In the process I was pleasantly surprised by the many places where seemingly unconnected articles spoke from similar frames of reference and, most interestingly, from overlapping source bases. 1 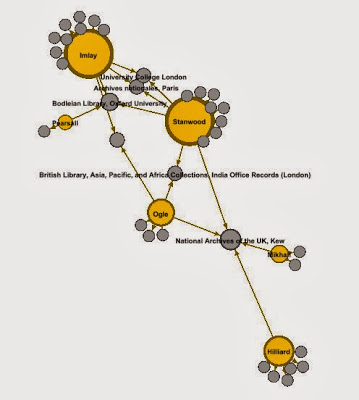 Figure 1. Authors of articles in the 2013 AHR connected by commonly used archives.

¶ 3 Leave a comment on paragraph 3 0 In my own work I am very interested in tracking the circulation of texts, ideas, and archives over time as well as how scholars use these sources. Tracking networks of citation is nothing new, and has been a favorite activity of scholars for centuries, but recently there has been a surge of interest in the quantitative analysis of academic citation patterns. Most of this interest has been in the sciences and social sciences, where “impact factors” (put simply, the quantity and importance of articles citing one’s work) are de rigueur in weighing scholarly merit. Though I am wary of many of the developments in this “bibliometrics” field, some of the more useful advances use data about authorship and citation to show the material ways fields are constructed, such as through the influence of certain universities, graduate programs, or scholars in a specific sub-discipline. At the University of Pennsylvania, for instance, my colleagues at the library have helped the School of Medicine and other departments to create a way to view the co-authorship networks of particular researchers.

¶ 4 Leave a comment on paragraph 4 0 Though tracking the citation of articles and secondary sources in a journal like the AHR would really illuminate networks of influence, interest, and argument, I am more interested in how historians use archival sources. This is especially important given that the bibliometric wizards at big publishing companies like Elsevier and Proquest have done a decent job at figuring out article and book citations and linking them together, but have had much less success with archival sources.

¶ 5 Leave a comment on paragraph 5 0 I extracted data on archival sources from 16 of the 17 feature articles in the five AHR issues for 2013.2 The authors of these pieces did not disappoint, citing 66 different archives and libraries located in 54 different cities, from Berkeley to Sarajevo to Zanzibar.3 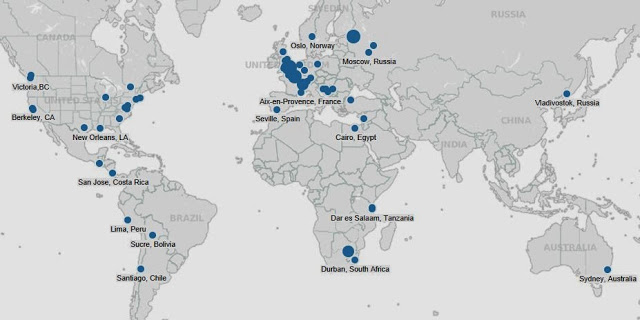 ¶ 7 Leave a comment on paragraph 7 0 Despite disparate topics and the relatively random assortment of scholars and articles across the year’s issues (as far as I can tell none of the articles were grouped in “theme” issues), there were several nodes of archival overlap.

¶ 9 Leave a comment on paragraph 9 0 Obviously one year of the AHR is a pretty weak sample, but I suspect the pattern established would hold across a wider swath of the journal. That is, I imagine that what would emerge is an impressive array of geographically dispersed archives based on the focus of particular authors as well as a concentration of overlapping citations from the major state and university archives and libraries of Europe and North America. Along these lines, I would be curious to see how the influence of particular archives has waxed and waned over the years in the profession. I imagine that a select number of repositories (e.g. the National Archives and Records Administration, the National Archives of the UK, the British Library,  the Library of Congress, the Bibliothèque nationale de France, various German archives, etc.) have long been dominant across geographic and temporal fields given the institutional makeup of the historical profession. However, I would also be surprised if the dominance of these central archives has not decreased given methodological and theoretical shifts in the discipline since the 1970s.

¶ 10 Leave a comment on paragraph 10 0 This question, though, speaks to the point in writing this piece. Doing such an analysis of the AHR or any historical journal across the last 50 or 100 years would be extremely difficult (at least for me) given both the available formats of back-issues of electronic journals as well as the way we as historians cite archival sources. The first point is the easier to address. Looking at citations in the 2013 AHR was relatively easy given that all but one of the featured articles were available in HTML and had their notes arranged in one clump at the end for easy scraping. For older issues of the journal only OCR’d PDFs are available, which makes the precise scraping of just the footnotes a bit more complex.4

¶ 11 Leave a comment on paragraph 11 0 The second issue may be the more difficult one. While the names scholars use for archives and archival sources within their work follow the rule of internal consistency (state an acronym or short title for an archive and stick with it), they do not always link up well to how other scholars might cite similar repositories. Take the vexing problem of The National Archives of the United Kingdom at Kew, for starters, which was the archive most commonly used by the 2013 AHR authors. When it comes to Kew, my own citation practices are willfully disobedient; I cannot stomach writing the preferred abbreviation “TNA” (really? “the” in an acronym?—not cricket). But even when historians do the right thing it still is not that simple. When citing The National Archives in the 2013 AHR, Stanwood and Hilliard both used the identical form “The National Archives, Kew [hereafter TNA],” but Mikhail and Ogle used slight variants: “The National Archives of the United Kingdom [hereafter TNA]” (Mikhail) and “British National Archives, Kew [hereafter NA]” (Ogle). Additionally, after computationally sorting the data I was convinced that Fair had also cited the Kew archives in her work on East Africa, as several footnotes read something like, “TNA 435/B/2/2.”5 But wait … on the first page of Fair’s article:

¶ 13 Leave a comment on paragraph 13 0 Now that’s a proper acronym! Of course in the context of human readers this is not much of a problem (though one can easily imagine both TNAs being cited in an article on British East Africa), but when looking at patterns at a large scale this has the potential to be a bit troublesome.

¶ 14 Leave a comment on paragraph 14 0 But why is this really all that important except in doing macroanalysis of journals or dreaded “metrics”? I was a bit skeptical myself until I saw the power of linking sources, as brought to bear by Proquest in its electronic edition of my dissertation. The system managed to extract 452 “items” from my dissertation bibliography. Though it struck out completely on archival sources, Proquest did an amazing job with book and article citations, opening up a world of possibilities for finding colleagues and sources in the field I did not know of before.

¶ 15 Leave a comment on paragraph 15 0 For example, in its automated searching of my bibliography, Proquest identified correctly a somewhat obscure (with apologies to epigraphers!) monograph of Indian inscriptions. Helpfully, anyone looking at my work can then click the name of the book and see a list of the three other dissertations that also cited it: 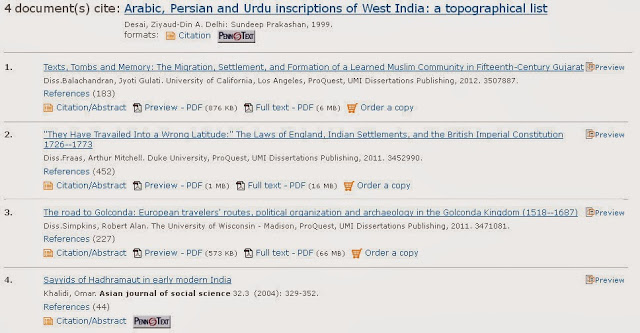 ¶ 17 Leave a comment on paragraph 17 0 Unsurprisingly, this led me to hours of clicking through to other dissertations and finding all sorts of people I had never heard of before.

¶ 18 Leave a comment on paragraph 18 0 This kind of linking and search capability would obviously be enormously useful for archival sources. Taking just the 2013 AHR articles as examples, imagine if every one of Pettit’s citations to the Atherton Papers at the Bancroft Library linked to other articles citing this collection; or if when Stanwood cites State Papers 96/9 at Kew, other scholars’ work citing the same record number also popped up. As a historian of India I know I would have been fascinated to see Ogle’s use of the Indian newspaper summaries in BL IOR L/R/5/161 also link to other work using the same documents; or I would be excited to see the connection when Stanwood cited a particular letter to St. Helena (BL IOR E/3/92 f.17), which is also referenced in several pieces by Phil Stern in his work on the East India Company.6

¶ 19 Leave a comment on paragraph 19 0 Needless to say, the possibilities are pretty exciting, but a lot of work needs to be done to get there. For a start, I wonder if historians and historical journals could begin adopting some of the linked data sources available for libraries and archives. Much like airports have codes (IAD, DCA, BWI, etc.), IDs are also available for many of the world’s major libraries and archives. For more than you ever wanted to know about the history of library identification codes in the United States see the Library of Congress summary here. Though an imperfect solution, when seeking unique identifiers for libraries and archives I usually start with OCLC’s registry (for example, see the entry for the Bancroft Library (OCLC-RQE), which also lists ISIL numbers). I do not know how much I want to push this, but what about embedding International Standard Identifier for Libraries (ISIL) numbers or other codes within electronic versions of articles? Use “TNA,” “BNA,” or “BA” all you want in the text of a piece, but perhaps with “OCLC-UKARC” embedded in some fashion? Even for archives and libraries in parts of the world not covered by these indexes, there are usually some kinds of identifiers available. For example, the archives in which Smith found some of her fantastic sources (the “Gosudarstvennyi arkhiv Iaroslavskoi oblasti”) could also be identified as ArcheoBiblioBase R-263.

¶ 20 Leave a comment on paragraph 20 0 In a perfect world I can even imagine these kinds of identifiers being integrated with other linked data sources for proper nouns. Why not even go all-in and include references for people and places as well? For example, Michael Pettit, the author of one of the AHR’s 2013 articles, is better known in the library linked data world as VIAF 233554130, which includes information on alternative forms of his name.

¶ 21 Leave a comment on paragraph 21 0 Though much of this linking work is impractical for individual historians, I would love to see flagship journals like the AHR step forward and contribute. In a world in which libraries and scholars balk at the increasing cost of purchasing electronic journal subscriptions, this seems like a clear value-added that is easily justifiable. In addition, in many ways the people best positioned to see the whole range of work cited in a field are those involved at the journal level, and thus they might be able to implement linked data more universally.

¶ 22 Leave a comment on paragraph 22 0 Finally, I want to make sure to say that this is a great problem to have as a field. How exciting is it that historians get to visit archives in every corner of the globe and seek out new sources to better our understanding of the past? The fact that we do not have an easy set of archival identifiers yet is probably a great indication of how diverse and fast growing the discipline is. I hope no effort to implement these kinds of standards gets in the way of that! 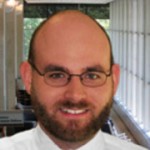