Undergraduates in the Archives – Hebblethwaite 1

¶ 1 Leave a comment on paragraph 1 0 The Vodou Archive is a collaborative partnership spearheaded by the University of Florida and Duke University that seeks to improve the understanding of a central Haitian and Haitian-American spiritual tradition by gathering the audiovisual and textual sources of Vodou communities, interpreting what we collect, expanding the holdings through a self-submission tool, and diffusing the knowledge via an open access digital library.  You can find the current prototype here <http://www.dloc.com/vodou>,  hosted within the existing Digital Library of the Caribbean (dLOC). In addition to the twenty-seven international partners working with the Digital Library of the Caribbean, collaborators from the University of Notre Dame, the University of Miami, the Schrijversvakschool, Florida International University, the Université des Antilles et de la Guyane, and City Lore, among others, will contribute elements to The Vodou Archive. This project belongs to a tradition of scholarly work stretching back to the early twentieth century that has sought to counter reductionist and racist visions of the religion through ethnography, analysis of culture and music, and an exploration of the role of Vodou in Haiti’s founding revolution. Such work has long turned to the central texts in Haitian Vodou: its Creole-language songs.

¶ 2 Leave a comment on paragraph 2 0 Building on my book, Vodou Songs in Haitian Creole and English,[1] The Vodou Archive project makes these songs available in Haitian Creole and English, along with substantial interpretative annotations and essays to contextualize the collection. The edited and curated materials in The Vodou Archive are of major literary, historical, cultural, and religious significance. The vast Vodou corpus stands out because it preserves a wealth of African cultural, ethnological, and historical knowledge.[2] The oral and textual corpora of songs are comprised of the authentic and living traditions of the Vodou religion. They are primarily sung in the context of Vodou worship in public and domestic ceremonies, and they constitute the sacred literature of the religion. Vodou songs, a constant in ceremonies, address the mythologies and characteristics of the religion: Bondye (God), the Marasa (the Divine Twins), the lwa (spirits), and the dantan (ancestors), as well as their relations with humans and nature. Vodou songs are time capsules that reveal the history and origins of the Haitian people in Africa, their journey to the Americas in the French slave trade, and their lives in the French colony. Due to their sacred nature, they arewell-preserved records of African and Haitian history and culture.[3] Ceremonies and songs preserve African historical (i.e. Bosou, Achade, Legba, Danbala, Simbi, Ayizan), cultural (i.e. lwa, ounsi, ason, oungan, manbo) and geographical (i.e. Rada, Savalou, Boumba) terms in a creolized or blended religious and cultural system.[4] Likewise, there are numerous Vodou ceremonies (rites) classified by the African nanchon (nations/communities) where they originate, such as Rada, Petwo, Ginen, Seneka, Ibo, Danwonmen, Nago, Kongo, Kita, etc.[5]

¶ 3 Leave a comment on paragraph 3 0 Undergraduates played, and will play, a key role in this archive.  They contributed first drafts of transcriptions and translations of Vodou songs and interviews with Vodou practitioners for the book, Vodou Songs in Haitian Creole and English. The undergraduate students worked on transcribing and translating interviews that I collected from Vodou priests in Haiti and they also transcribed and translated rare pre-existing published materials.[6]  The students, Joanne Bartley, Vanessa Brissault, Kat Warwick, Wilmide Vernet, and Musset Apollon, were either paid hourly through grant funding or they earned credit for an independent study. We worked from manuscripts that employ a range of Haitian Creole spelling systems. The official variety, the “IPN,” named after the Institut Pédagogique National, was adopted for the first time in 1980. Many of our manuscripts predate 1980 and thus transcription required heavy correction and consultation with lexicographical works.[7] The students had been exposed to the official variety of Haitian Creole spelling in my intermediate Haitian Creole course. After establishing the Haitian Creole source text, the students produced the first draft of the English translation. Then I corrected the Haitian Creole and English drafts in various cycles as the materials moved towards the finished products, either the book or The Vodou Archive.  (See Figure 1, and for the related Vodou Archive digital library, Figures 2 & 3.)

Figure 1: The book cover of Vodou Songs in Haitian Creole and English.

Figure 2: The homepage of the Vodou Archive.

Figure 3: This screen shot presents the view inside of the Vodou Archive with the filter menu for narrowing results on the left hand side of the screen. 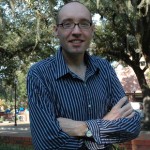